One lesson in life we all seem to face is that despite our greatest efforts at making plans, things are often out of our control. This is a lesson Shelby Armstrong has learned throughout her life, and especially in her role serving as a Buddy for a child with special needs.

Shelby’s husband, Isaac, serves active duty in the Navy, which means their family has lived a nomadic life. In their 24 years of marriage, they have lived in two countries and moved across states fourteen times. Shelby says, “The good part of that is that we have seen two things. We’ve seen that God's hand is in all things, because even when we thought we were going one place and didn't, there was a reason God had altered it. Also, you can make plans in life, but sometimes God is going to laugh at you and say ‘No, I've got something better.’ We like to plan and we like to know the logistics, but it all works out in just letting it go. You’ll look back and realize that His plan was a better plan.”

This experience has been especially beneficial to Shelby in serving in our Special Needs Ministry. Three years ago, she started working in preschool as a teacher when Jozef, who was two at the time and had recently been diagnosed on the autism spectrum, came to her class. They had a special connection, and he ended up returning to her class the following year. Then, “Last year, Dawn Stephens, our Special Needs Coordinator, approached me and asked if I would mind officially being Jozef’s Buddy.” It was a change of plans, but Shelby didn’t have to think twice. She was all in.

Transitioning from being the teacher of a preschool classroom to devoting one-on-one attention to a student took some adjusting, but she saw God’s hand in it all. Even though there are plans for how a classroom is run, she saw the importance in being able to adapt those plans for children with special needs. “A child may not be able to do things a certain way or needs it to look differently, so just letting go and being flexible is important.”

She was also able to see the difference from the perspective of the teacher. “They could feel less divided if Jozef needed something different, without taking their focus off the class. It also allows the children with special needs to be more engaged and involved on their own level. How that looks concretely and specifically varies by child, but there is value and importance in doing so. As Psalm 139 says, and as Jeremiah 29 says, God knows those kids and has a plan for them. They have great value. It also allows the children with special needs to live with and amongst their peers, and allows their peers to learn how to be inclusive, patient, kind, and welcoming with others who may respond differently to different situations.”

Shelby has continued to be reminded to hold her plans loosely throughout her time as a Buddy. “What works with one child doesn't always work with the next, because each child is different.” This allows the relationship between the Buddy and their child’s family to form and grow as the two work together to love and help their child while at church. She says of this relationship, “They'll come in and you can see the look on the mom or dad's face and it'll tell you, 'Ok, it's gonna be a great day,' or, 'Ok, the struggle is real today,' and you'll both just start laughing when you read the look on each other's face.”

This relational aspect of being a Buddy has been so special for Shelby. “You don’t realize how attached you get to your child, and how attached that child gets to you. They become a part of your world and a part of your family, and vice versa. These kids are incredibly smart and incredibly gifted. Seeing that one-on-one is awesome. You get a front row seat to watch their faces light up as they get things, and then hear them recite things in their own way of what they're hearing, learning, and grasping. You hear them make that spiritual connection. They were created and are special just like everyone else is. But they can't always voice their needs, and they are little, so they need that grown up voice to help advocate and speak up for them. If you don't speak up, who is?”

“My Jozef, he's a hero. He came to me nonverbal. He was saying a few words, but I didn't understand what he was saying. He would not make eye contact with anybody. Now, he's making eye contact with me to the point that he will take his hands on my face and make me look at him and speak directly to me and say, ‘Mrs. Shelby.’ Watching that growth and watching that change is huge and priceless, and I wouldn't give it up. People who aren't plugged into Special Needs Ministry are missing out.” 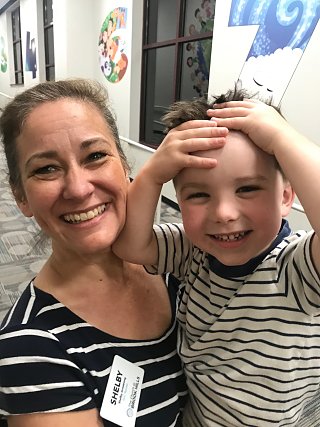 Shelby Armstrong and her family moved to Birmingham in 2016, the longest they have lived anywhere besides Japan. She is married to Isaac, and they have three kids, Isaac (23), Anna (21), and Rachel (18). She works as a Preschool Teacher in the The Brook Hills Early Learning Center.

In addition to serving as a Buddy, we have immediate opportunities for adults to serve as a host in our sensory friendly room, The Quiet Place. To learn more about these opportunities, and our Special Needs Ministry, visit brookhills.org/specialneeds.