I moved here to Birmingham about four years ago. I had an aunt and uncle living here when I was growing up, so we always came to visit them over the summers. We were really close to them, but my uncle passed away almost five years ago. When I was here for the funeral, I felt like the Lord was telling me that someone from our family should be here, because the rest of our family is in Texas. So I was like, “Ok Lord, that’s great. Somebody should be here, but that’s totally not me. I’ve got this great job and a church that I love.” However, over about a three month time period, the Lord really worked on me. My small group was reading through Radical at the time, and the Lord just used that to confirm that Birmingham was right for me.

Moving here from out of state, it was really tough to find my community at first. I thought it would be easier than it was. So when I had been here about six months, I decided I had to actually put myself out there. I couldn’t just sit in the seat and wait for someone to come up and say, “Hey, let’s be best friends!” So it was kind of a tough first six months or so. Then I started going to a small group close to my home and I loved the people in the group, but it wasn’t really a great fit for the season of life I was in. The people in the group were in a totally different season of life than me. So I started going to a small group with people who were my age and in my season of life. That was about a year after being at Brook Hills. For that season those people were my family. We were almost all singles from other states. So most of us didn’t have family here. We became family for one another.

Brook Hills has really kind of been a second family to me, with not having any family here. Then last year, finding out I had the mass on my brain, people at Brook Hills rallied around me.

It was really crazy how it started. I thought I had the flu, or something similar. I started having really bad headaches and being nauseated for several days in a row. And I had just joined the vocal team at Brook Hills. It was my first Sunday up leading worship and I was so incredibly sick. So I went to see my doctor and he couldn’t find anything wrong with me. No fever. No symptoms. Nothing. Then he said, “Let’s do a brain scan to see if there’s anything in there causing headaches, nausea, pain in my neck, things like that.” So we did a brain scan and a few days later.

I was at work here at Brook Hills and I got a phone call from my doctor. And he said, “So I don’t want you to panic, but we found a small mass on your brain and we want to send you to a neurologist and see what they say.” So that started my journey in September of last year, trying to find out what it is and what are we going to do about it.

When I first got the news I was fine when I hung up the phone with the doctor. I went to my boss and told him what was going on. I had a normal conversation about it. But within the hour I was crying in the parking lot, like, I’m going to die. Even though we didn’t know what it was for sure, it was just tough trying to process all that.

Then for the first couple of months they went from saying, “We think you have brain cancer,” to “We think you have early onset alzheimer's.” Just this range of things that were horrible. And I was like, “I don’t want to deal with any of that, what am I going to do?”

So life kind of stopped for three or four months. I felt kind of paralyzed as far as making major decisions or traveling. What if something happens and I’m away from my doctor? All those unknowns. So I really did feel paralyzed by it for a while. But I had great friends who were just consistently like, “Hey, we’re here. Don’t let life stop. You’re still alive. Live your life.” I came to the point where – at first it was out of the frustration of just not knowing what was happening – I was like, “Ok, you know what? I’m done with this. I’m going to live my life. I can’t sit in a bubble for the next however long until we figure it out.” So I just kind of picked myself up by my bootstraps and said, “Let’s go on.”

I was still in school and still working. So all those responsibilities still had to be done. But as time has gone on, I feel like there have been some really dark days when I’m thinking, “Why is this happening? What does my future look like?” But then the Lord has been teaching me so much through it. It was interesting, right before this all started, I had been reading through the Psalms for about six months. And continued that as this was going on. I was trying to pray through the Psalms in a year. Just praying and journaling one Psalm a day and just seeking what the Lord is teaching me through it.

So I am having to hold on to that Psalm for so many reasons. His love is better than life. It talks about how “my soul thirsts for you and my flesh faints for you.” Like, is that how I’m living my life? Where I desire the Lord above anything else? Even above healing or answers?

Then the end of the Psalm talks about, “when I’m laying in bed in the middle of the night, I’m going to meditate on You. In the shadow of Your wings, I sing for joy.” So just really grabbing onto that, memorizing that Scripture, saying it to myself over and over when times are really tough and just realizing what the Lord has done and who He is. He’s God, no matter what’s going on in my life.

I think it’s really easy for us in really difficult situations to question, like, “Is He really God? Is He really good?” We hear in Scripture that He wants really good things for us, but when we experience tough times we don’t see those as good things. But we don’t know what He’s doing or how He’s working it out. I can truly say over the last 10-15 years of my life, really, since I became a believer around age 20, I’ve seen that even in the hard times, when you come out on the other side you can look back and see what the Lord was doing and how He was preparing you for something down the road. So I'm not really able to know what the end is right now, but I do know the Lord is going to use this, and He’s preparing me for something. It may not be anything I know about while I’m here on this earth, but I’m just trying to walk faithfully in that and continue to live life. Part of that’s for my family, too. Because it’s hard on them. But if I can go on and live my life and worship Him in this, they can too. There’s a lot of reasons why you just keep going forward one foot in front of the other.

It’s been almost a year and we’re still not entirely sure what it is or what we’re going to do about it. But I’ve had probably six brain scans over the past year and there has been no growth or change, which is really great. They’ve ruled out a lot of things, which is really good, but we’re still not 100 percent sure what it is. Possibly a tumor that is not cancerous, which is fine. But it could potentially be a couple of things, like Parkinson’s or MS. So we’re just kind of waiting to see if symptoms progress, so they can kind of figure that out. In the meantime I’m just managing my symptoms with medications. It is causing some loss of motor function on the right side of my body, which is really frustrating. And every time I go back to my neurologist, she’s like, “Yea, we’re seeing a little more progression in that.” And I’m like, “I’m like 32, man, what do you mean there’s loss of motor function in my body?” They think that because of where the mass is it’s pressing on that part of my brain and causing that. So if that gets severely worse, we can do surgery. But right now the symptoms are manageable, so there’s no reason to do this major surgery on my brain if we don’t need to. Plus, I think I’d look terrible bald, so I keep trying to put off them shaving my head as much as possible.

I am so thankful for the people in this church who have truly become a second family to me. People stepping out and saying, “Hey, come stay with us. We’ll go to the hospital with you. We’ll take care of you if you have to have surgery.” All these things that made me feel like, even though my family is so far away, I’ve got family here. Even though they’re not blood, they’re my family. They’re my brothers and sisters. They care about me and want to see me through. It was really an encouraging time that my faith family was willing to step forward like that.

I am by no means super spiritual about this situation. There are days that are so hard and I question God's goodness. During those times, one of the main things that really encourages me is hearing our church sing truth on Sunday. Singing the words of the gospel and hope.

My story is kind of like a Psalm. Where I question God and then tell him that even though I don't understand, I know all I have is Him and I'll stand on that and fight with that. 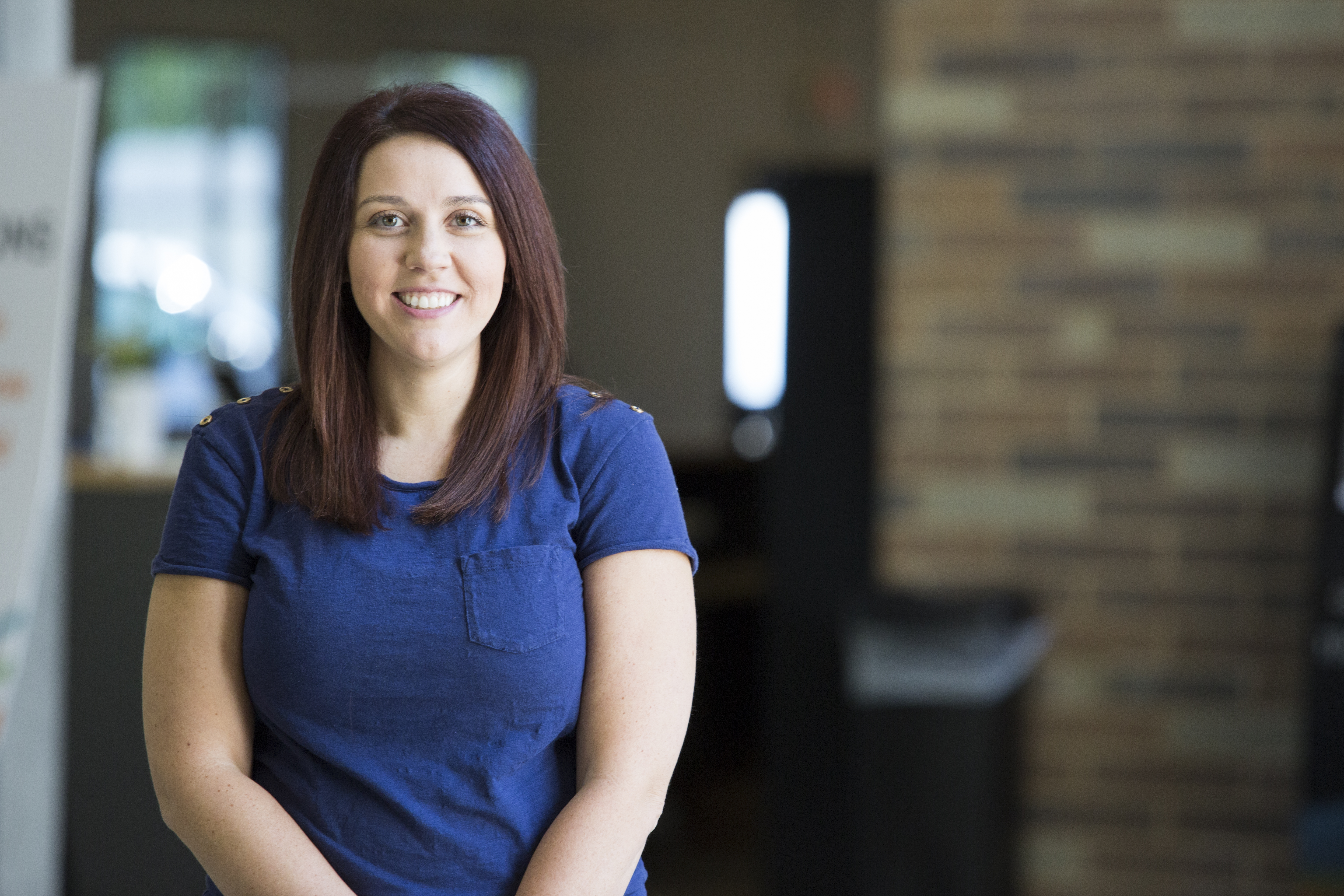 Stephanie Davis is a native Texan who relocated to Birmingham in August of 2012. She has been on staff at Brook Hills since December of 2012, first working in our Local Missions department and now in our IT Department as our Data & Membership Associate. She is currently working on her second Masters through New Orleans Baptist Theological Seminary's extension center here in Birmingham. One of Stephanie’s favorite things to do, when she’s not working or studying, is to go to the movies by herself—what she describes as her introvert's dream!

Read more about Stephanie's journey on her personal blog, radicallifeistough.wordpress.com.