Following the screening of a film by Erwin Brothers Entertainment, a musician came forward to speak with Directors and Producers Andy and Jon Erwin.

“I loved this movie,” he said, “and I just wanted to let you know I’ve been developing my life story for the past five years. I wanted to ask if you guys would consider directing it.”

Andy replied, “I don’t know if you know this, but the people who have been working on it sent us a script this morning to ask if we were interested.”

The man was Bart Millard, lead singer of MercyMe and writer of the song, “I Can Only Imagine.” Through that meeting, Andy immediately recognized God’s hand in bringing them together and providing an opportunity to share a compelling story of redemption with the world.

The brothers were drawn to the story for many reasons, but Andy describes music as something he and his brother have always loved.

“We love the amazing way God uses music in our church to preach the gospel. I think that really started with Matt Mason and continues with Daniel Renstrom. The music at our church ministers to us. I think music has the power to move your soul and allows you to reflect on the gospel in a way that engages both doctrinally and emotionally.”

About 17 years ago, when Andy was in college and Jon was still in high school, the Erwin brothers followed a dream, and a production company was born. They started small, with ministry videos and music videos, and eventually – after praying for God to reveal stories He wanted them to share – they decided to take a leap of faith and dive into producing and directing movies.

As they began putting their third film together in 2010, Andy shares, “We were just praying with our families, ‘God, what is our purpose? What is it you’ve specifically called us to do through our movies?’”

Meanwhile, David Platt was preaching through a series called “Gospel Threads” at Brook Hills. Andy began meeting with David and searching for ways to communicate the gospel through what they did.

“We were kinda tiptoeing around the message of the gospel with our previous movies,” Andy explains, “which were wholesome entertainment. But when we heard those sermons at church, I think it really emboldened us to just step out and be real with the gospel. And we found out that American entertainment is exported around the world, translated into different languages in every country with theaters. So we embraced the story of ‘Woodlawn,’ as an opportunity for evangelism.”

Despite the heat they received for it in distribution, the brothers decided to include a hotline at the end of the film for those interested in learning more about Jesus. The result after the movie’s release, Andy says, was “over 10,000 calls received and 25,000 decisions for Christ reported, from all over the world. It was an explosion of evangelism.”

He continues, “And everything we did was so exciting that we just decided this is what we’re going to do every time. For my wife, Mandii, and I, it was a heartbeat that was born for us through relationships at Brook Hills. As partners, Jon and I really got excited about finding ways to weave gospel threads through storytelling. Our desire was to use the power of testimony to show the transformation of the gospel in action, which led us to the movie, ‘I Can Only Imagine.’

“Not many people know the amazing, redemptive story of a broken father-son relationship that led to Bart Millard writing this song. We were able to tell this story that showcases the gospel in such a beautiful way. It provides a hope for healing and restoration. It shows no relationship is too far gone, and the gospel can really heal even the deepest wounds.”

Mandii Erwin also shares what the Lord has shown her through the story, “What is so amazing about grace to me is that the work of the Lord is just for us to believe in Him (John 6:29). In the story, Bart's father had nothing to offer, but when he accepted what Jesus did on his behalf, God’s spirit did something incredible through his faith. And now waves and waves of people are impacted by his belief in Jesus – through the song, and now the film.”

The process of telling this story impacted Andy in a personal way. “I was really nervous about the concept of being an artist versus being a believer,” he says. “I worried about what my peers thought of me and my Christianity – wondering if I’d be ostracized from the industry. So there was just this insecurity.

“Starting with ‘Woodlawn,’ through encouragement of friends at Brook Hills and the process of putting these movies together, God began teaching us to be stewards of what He’s calling us to. Especially with this movie, it’s just given me a freedom. It’s not about me, and it’s not about me as a filmmaker, it’s really about the opportunity for the gospel – about trusting the Lord and being faithful to whatever God gives us to steward. And I think God really restored a joy in the job. I have never had so much fun as a filmmaker – there’s a purpose and a passion behind it.”

As the Erwin brothers started filming, the challenges along the way began to build.

“It seems that especially when you’re doing something evangelistic in nature,” Andy says, “the spiritual warfare is off the charts. You go from regular life to feeling like you’ve kicked a hornet’s nest.”

While he and Mandii both battled significant health issues, Jon and his wife, Beth, faced open-heart surgery for their young son.

Yet, in the midst of the storm, they saw God’s grace. Andy expounds, “First of all, we were surrounded by a community of believers who encouraged us. Then Matt Mason preached on spiritual warfare and going through trials, and it just hit home with me. I was able to see we were where God wanted us to be. It’s encouraging to be at a church that understands what it’s like to be in the battle.”

Through the many challenges, Mandii adds, “God did a work in my heart.”

She found encouragement in John 14, when Thomas asks, “How can we know the way?” Jesus responds, “I am the way, the truth, and the life.”

“All I need,” she says, “is to believe what God said and trust Him. Jesus and His grace are always the way through.” 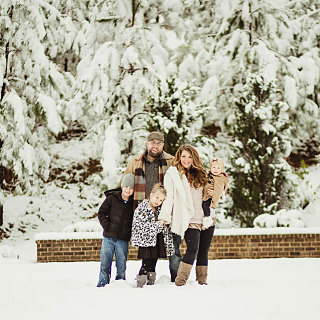 Andy and Mandii Erwin have been attending Brook Hills for over 10 years. They have three children: Isaac (9), Amelia (6), and Penelope (17 months). Their desire is to partner with the local church, to use the movies as a tool to reach the lost, then to plug them back into the local body of believers.

As a production company, Andy says, “that’s really our focus. My challenge to the church is this: My brother and I can make a movie, but where the rubber meets the road – where God changes lives – is really through the local church. We believe this can be an opportunity to reach the lost in the community around Brook Hills.”

I Can Only Imagine – Official Trailer:
In Theaters March 16