For Ann Ashton and Conner Jones, being parents to their daughter, Miriam, known as Mim, has been one of life’s greatest joys, but their path to parenthood was a challenging one.

Before having Mim fifteen months ago, they had been on a two-and-a-half-year journey of infertility, working through different medicines and doctors. Ann Ashton says of this time, “It was very challenging, especially because we are in the life stage where everyone is having kids, and in infertility you can feel very much alone and at times forgotten about.”

In the midst of fertility treatments, they also experienced loss through a miscarriage. “Honestly, it was a really dark place. I would love to go back and tell myself to keep trusting in the Lord. Because even in the midst of not understanding why all of it was happening, and honestly being kind of mad, His Spirit sustained us through that. He knew what we needed, even when we didn’t.”

One way God provided for them was through the church and their small group. “It was sometimes hard to even pray for everything ourselves, and so it’s encouraging to know you have other believers who are lifting you up to the Father when you feel like you can’t even do that yourself.”

He continued to sustain them once they became pregnant with Mim. “During the early part of pregnancy, because we had experienced a loss before, I was terrified that we would go through the same thing. I feel like up until that point we were angry with God, but then there was a big switch in me that I was so dependent on Him and on prayer to get me through. I just remember praying so hard and giving it all to God at that point and leaning on Him to sustain the pregnancy.”

After having Mim, they continued to see God’s provision in each stage of their parenthood journey. “As difficult as it was to get pregnant, God really blessed us after Mim was born because she was a very easy baby. Of course it’s a dark period when you are only sleeping two hours at a time, but it was a really joyful period.”

Conner says of this time, “I was really worried if we could handle it when the baby came, but the Lord provided. We were able to manage and the church came alongside and helped. We had constant meals and people coming over and just hanging out for a while.”

Now that they are over a year into parenthood, the body of Christ has continued to be a source of support. Even by simply being a part of the church, they are encouraged by seeing other families raising their kids in the way of the Lord. Conner says, “We lead a group of 1st graders on Sunday mornings, so we see those kids as they get older and see them loving the Lord and being faithful and obedient to their parents. It shows us this is doable. Of course, church is not the primary parent for their spiritual discipleship, but it is such a huge partnership between us. It gives us confidence that we can do this, because otherwise we couldn’t do it on our own.”

A few weeks ago, they participated in the Parent Commissioning Class that is put together by our Preschool Ministry team. The class is based on this idea of the partnership between parents and the church, seeking to equip and provide parents with resources as they lead their family. Conner reflects on the class, “It far exceeded my expectations, from the thought that was put into it and the materials provided, to the Q&A panel session. I was blown away by the wisdom that poured out from the panel. And it was so encouraging to know that these are people we know and have access to, and we can lean on them when we have questions.” Ann Ashton adds that, “It was a great reminder of who we have partnered with and who we have on our team to help raise our child in Christ.”

One practical way the church has encouraged them in raising Mim is through implementing family Bible study and worship. Conner says, “Family Bible study was mentioned during Parent Commissioning and has been encouraged in many discussions and sermons at Brook Hills. Each day we usually read a short passage of Scripture or a children’s Bible story book. Then we sing ‘Jesus Loves Me’ and pray. It's very simple, and Mim enjoys the reading and signing. Our goal is that it becomes a fixture in our family and that we grow together spiritually through it. We want to be a Deuteronomy 6:7 family and to talk about Jesus and our relationships with Him often, comfortably, and candidly.”

As they reflect on what God has been teaching them in their journey so far, they have found great comfort in the Lord’s mercy and strength. Ann Ashton says, “God is teaching me that if I’m faithful to what He’s called me to do, then to leave the rest to Him. We’re not gonna be able to do this on our own, and that’s why we need to trust Him in this.” Conner adds, “Our lives and our responsibilities have changed, but He is with us throughout it. He’s merciful and He meets us wherever. Late at night, early in the morning, or whatever life throws at us, He has been with us.” 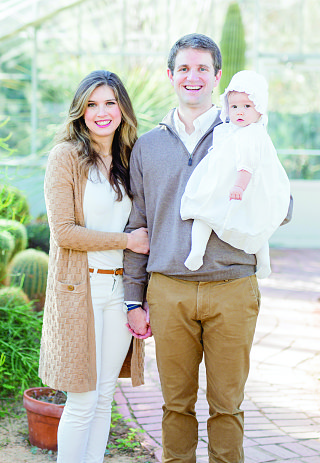 Ann Ashton and Conner Jones have been married since 2012 and are the proud parents of their 15-month-old daughter, Mim. They have been members of Brook Hills since 2015. They currently serve as Faith Trainers with BH Kids, and Ann Ashton serves on the WRAP leadership team.