“Home ownership has been an exciting and fruitful path the Lord has taken me on. However, it didn’t start out that way,” says Caitlin Irby, member of Brook Hills.

When she first became a homeowner in 2017, she recalls, “Hospitality seemed to require matching chairs and fluffy pillows. I bought into the idea that having the ‘perfect home’ meant it was styled and decorated with a professional eye. Amazon deliveries and HomeGoods purchases led to expensive credit card statements. Soon, I was drowning in the good intentions spent with credit cards, and I knew I had to make a change.”

Rewind five years, and Caitlin had recently graduated from UAB and joined a young singles small group, where the idea of money stewardship was first introduced to her. “I was intrigued by the topic, but it was only slightly important to me back then. I grew up in a household that did not talk about money. I was an avid saver as a child but learned little money skills beyond that.”

Over the course of the next several years, her small group leaders continued to pour into her, spending time getting to know her and shepherd her in her early adulthood years. Then, after Caitlin purchased her home and the debt began to add up, she turned to her small group leader, Faith. “I had a sit-down meeting with Faith to get my priorities straight. She had laid the foundation to be able to discuss these things years before, and it was her trusted voice that I sought to share truth with me about finances. She left no stone unturned and courageously asked me about my saving, spending, and debt habits. This kind of intentionality—invading all parts of my life—was new to me. It exposed what I thought was embarrassing and allowed for light to break in.”

“We pulled out all of the bills and pay stubs to see what was coming in and flowing out. From there, we set a budget with giving, spending, and saving goals. She taught me the basic principles of money stewardship, and then encouraged me to take the Financial Peace University class at Brook Hills when it was offered next.”

Despite the progress she had made, she was still hesitant to attend the class and express her lack of money stewardship knowledge and understanding. Also, she says, “I equated ‘budget’ with ‘missing out.’ I was hesitant to tell my money where to go, because it seemed more fun to spend it spontaneously.”

“Both of these hesitations were met throughout the class. Money habits are LEARNED. There’s no shame in learning. We do not know until we are taught. And, I was surprised to see that most of my classmates felt the same. We were a diverse group spanning multiple generations, income and debt ratios, and educational levels. It was a very welcoming, safe environment for us to bring our questions. I also learned the true power and freedom from telling each dollar where to go in a budget. There is room for spontaneity, but there is great wisdom in planning.”

Looking back, Caitlin says, “The Lord used the most unlikely of subjects to call me out into greater depths of trusting Him and walking in clear responsibility—money. Suddenly, this drab topic became infused with gospel hope for me. I learned that it was time to set aside old ways of handling the funds entrusted to me, and to study what the Word has to say on this topic. I’ve seen His heart as a provider throughout Scripture. His provision was never accidental or coincidental—it was planned. This has translated into prioritizing giving and wise spending and no longer giving out of what is left over.”

Now, she recommends Financial Peace University to anyone who will listen. “I have recommended this class to family members, friends, co-workers, and neighbors. Just about anyone willing to mention money around me has heard all about FPU. I believe in it because I’ve seen the change it can make. It costs around $95 for the entire course and it is the best way to spend that money. There is not anyone who does not need this. Just graduated college? Getting engaged? Got a new job? Been working for a while? There’s something here for everyone that is willing to be serious and obedient about money. But be warned, because it’s uncomfortable. I cut up my Home Depot credit card! I gave up all sorts of delicious foodie treats, wore last year’s clothes again and sold what I didn’t use. But you know what? I didn’t miss any of it. Not when what I gained was far greater.” 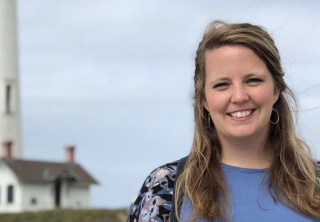 Caitlin Irby has been a member of Brook Hills since 2011. She works as a nurse at UAB Hospital, and serves as a College Ministry Student Leader.

Financial Peace University is a 9-week course that features video teaching by Dave Ramsey and group discussion centered around biblical principles for spending wisely, saving, eliminating debt, and giving faithfully. For more information, join us next Sunday, February 23, at 4pm for a free introductory session to meet the leaders and learn more about the course. Visit brookhills.org/fpu for costs and details.