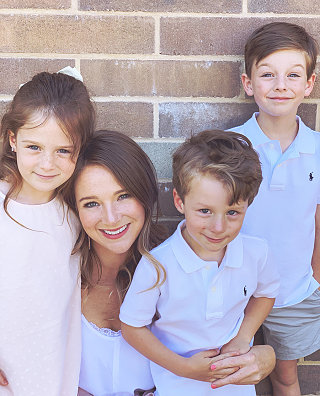 “I want to belong here,” is the thought that flooded Allison’s mind the first time she stepped foot in Brook Hills, almost ten years ago. At the time, she was newly married, pursuing things the world had to offer, and not yet a follower of Christ. Those feelings didn’t seem to make any sense.

Several years later, she returned to Birmingham to visit family while her husband was deployed. “After I had my first son, I did a lot of cleaning up my act because I was a mom now. I transitioned back into being the good upstanding moral person that I had been raised to be.” One night around the kitchen table, her family was having a lively theological discussion and Romans 1:28 was mentioned: “And because they did not think it worthwhile to acknowledge God, God delivered them over to a corrupt mind so that they do what is not right.”

While Allison had been sitting and listening, she recalls, “something about that verse just caught me in a way that it hadn’t ever before. I stood up and excused myself and went to bed, not to sleep, but to really wrestle with what I had just heard. I realized that, despite having cleaned up my act, having started going to church, and being a moral, upstanding citizen in legalistic ways, I was totally depraved. That night, the Lord saved me in spite of all my goodness and good deeds and good behavior. I really believe it’s such a picture of grace for me personally that God didn’t save me when I felt like I was farthest from him. He saved me when I had convinced myself that I was really close. That I was just outside of being a really good Christian, and it was then that God chose to turn my heart towards him.”

But her journey didn’t stop there. Over the course of the next four years, Allison struggled as she sought her identity and security in her roles as wife and mother, “to the point of holding on to them, even when they were hurting me and my kids.” When those parts of her life began to crumble, Allison and her kids left their abusive family situation in Florida and moved to Birmingham. Her mother and sister had become members at Brook Hills in the meantime, and it was then that her desire from many years prior came full circle. She reflects, “When we came to Brook Hills that first Sunday after I was a believer, that first Sunday after becoming a single mom, that was really the first step in a new direction in my relationship with the Lord.”

Now in her role as Preschool Ministry Associate, she remembers that time, newly single with three kids under four in her care. “It was Preschool Ministry that came alongside me and really linked arms with me in the ways that they loved my children and me. There were times when I felt like I had nothing else to give, times when I needed to be in a small group or be in worship, or to be serving in a different capacity. They allowed me to have those opportunities. It is such an honor now to be a part of the ministry and to be able to give back to so many people who have been a part of pouring into my life and into my kid’s lives. It’s an honor to know that what we do on Sunday mornings and what we do during the week plays an active part in the building of relationships with people here in our faith family and their relationships in the Lord.”

Her favorite part of serving on staff is getting to meet families where they are in the stage of parenting young children. “I ask a lot of families on Sunday mornings how they are doing, and they often say, ‘We’re here.’ I think that is so great that I get to ‘be here’ with families of young children.”

Allison Foster has served on staff at Brook Hills as Preschool Ministry Associate for children from birth to two since February 2018. She has three children, Garrett (7), Averie (6), and Mason (4), and has been a member at Brook Hills since May 2016.