Today's post was written by Brook Hills' member, Britton Lynn. Britton serves as the Traffic Anchor for Good Day Alabama, reports for Sideline, and contributes to FOX6's Saturday college football show, Tide and Tigers Today. To follow her journey with Unadopted in July, visit Britton's blog at this site.
It started last April. My small group and I traveled to Haiti with Mission of Hope. Enthusiastic about what I saw, learned, and experienced, I wrote a blog post about the trip to share with family and friends. 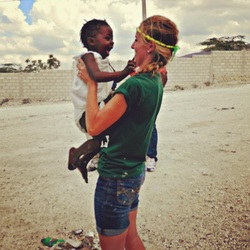 The trip humbled me. Just a day after returning home, I was back at work speaking to over 719,000 people on the most watched morning show in the state, Good Day Alabama. I suddenly felt convicted.

In the parable of the talents, Jesus explained: the only way to misuse your talents is by not using them at all (Matt. 25:14-30). I felt I had missed a great opportunity to share what Christ was doing in Haiti. Even though I don't work full-time at a church or for a nonprofit, as a follower of Christ I am called to live on mission (Matt. 28:18-20)--and that means using my gifts to bring God glory.

As a journalist, I've had the opportunity to report on a number of human-interest stories throughout my career. My favorites are the ones where locals lead their communities despite challenging circumstances.

It's the unsung hero who overcame homelessness. Now, not only does he sport a fitted jersey and new equipment at practice, but also a grin the size of Bryant-Denny Stadium. It's the 16-year-old golfer who, with the help of her proud father, now tees, putts, and strikes the ball with ease--despite being legally blind. It's the linebacker who won't let his insulin pump stop him from accomplishing his dream of collegiate ball--or from sacking the opposing quarterback.

I've seen first-hand how storytelling can change lives. On April 27, 2011, I watched a tornado destroy my town, Tuscaloosa, and take away one of my friends.

I still have nightmares about what I experienced that week. While the other students evacuated campus, I stayed with my parents (who drove in from Texas to help me), the National Guard, and families picking up pieces of their wrecked lives.

I didn't stay and report because it was fun. There was nothing fun about that week. I stayed because I thought maybe putting together a few stories would help people in other states hear about this disaster, see the need, and take action. And they did.

Viewers I had never met from across the nation started contacting me through social media. How could they help? What did we need? Donations poured in from all over. It was then that I realized the power of media.

Today, three years later, I try to remind myself of my responsibility. How I am taking advantage of this position God has entrusted to me and using it to bring Him glory (Ps. 67:1-2)? Thankfully, despite my constant failures, God continues to provide (Ps. 40:11-12; Jas. 4:2).

In late July, I'll be traveling to Uganda, Africa, with the Lifeline Children's Services' ministry,
(Un)Adopted.

The harsh reality is there are over 153 million orphans worldwide. Once these children reach a certain age, they are forced out of government-run orphanages (many age out as early as 13 years old). From there, these children are sent to live on their own without any aid. The majority of those children get pulled into a life of sex trafficking, drug abuse, and slavery.

The United Nations Children's Fund (UNICEF) reports that 8.4 million children work in the worst forms of child labor--prostitution and debt bondage--where children are often "exploited in slave-like conditions to pay off a debt." Nearly 2 million children are used in the commercial sex trade, where they face both sexual and physical violence.

(Un)Adopted seeks to "provide a hope and a future for orphans around the world by facilitating a safe environment to disciple and equip children in need."

Adoption is close to my heart. My grandparents adopted my father, better known in Springfield, Illinois, as "Little Orphan Andy," and my two aunts. I hope someday to also adopt. But more than anything, I am passionate about orphan care. Christ adopted me when I was dead in my sin and gave me a new life. Adoption is the perfect picture of the gospel (Eph. 1:3-10).

By joining alongside (Un)Adopted, I hope to show first-hand how this Birmingham-based nonprofit changes lives across the world. I'll be sharing with viewers what it looks like 7,800 miles across the North Atlantic Ocean, meeting Pastor Raphael in his school for deaf orphans and vulnerable children, and visiting the rooms of (Un)Adopted's partnering orphanages filled with nannies who work tirelessly to live out Jesus' commandment to care for orphans (Jas. 1:27).

My hope is by visually sharing (Un)Adopted's story others will want to join alongside them and their mission. The more eyes that see the posts and stories the bigger the impact (Un)Adopted will be able to have, so join in and share with your friends!