This week as we look towards Mother’s Day, we will feature various blog posts by mothers and about motherhood written by women in our church. Today’s post was written by Jan Rowland. To read Part 1 of her story, click here.

Shortly after our son was born, Erika divorced my father. Within months, I was introduced to his fourth wife. When he asked me to welcome her by calling her “Mom,” I refused. I told him that I had more than enough mothers! [He divorced her in less than two years and married his fifth wife. I never met her, nor would I see my father again until 12 years later. I deeply felt the loss of friendship with Erika and grieved my father’s absence in my own children’s lives.]

Our daughter was born two years after our son. With a toddler and a new baby, it was evident that I really had no idea how to be a mother. I had “babysitting” experience and loved my children deeply, but motherhood involved far more substance than I possessed. When my husband began pressing to attend church with our children, something ugly triggered inside me. I could not be a Christian. I had tried that. I didn’t fit that role and didn’t feel welcome in church.

I panicked, rebelled, then bolted. We were separated for 3 months, during which time I did just about anything and everything my sinful heart could imagine. It was frightening to discover the capabilities that lurked within me. One day as I was driving to work, a terrifying thought struck through my heart. Each of my sisters had grown up and were already divorcing by that time. My father had divorced and remarried several times. My birth mother had married again and was already divorced from that man. It was a family pattern! I felt doomed to that pattern, but when I factored its effect upon my children, it terrified me that they would have to experience the pain and frustration I had gone through. It jolted me into making a sudden decision, and I turned my car around. When I called my husband and told him I wanted to come home, he offered to come pick me up right then. I warned him that he may not want me back and revealed to him all the wicked things I had been doing. The first words out of his mouth were, “It’s okay, come home and we will work it out together!” It was only the second time in my life that I knew for certain I had experienced tangible, unconditional love, and I ran toward it. His response watered a dormant seed deep within me, and love, sincere heartfelt love, found a warm ray of light to reach toward.

A few months later after reluctantly reading the Bible for a few weeks, I read Galatians 2:20. An incredible flood of understanding washed through me as I read: “For I am crucified with Christ, nevertheless I live, yet not I, but Christ liveth in me. And the life which I now live, I live by the faith of the Son of God who loved me and gave Himself for me.”

An amazing realization of the truth of the gospel filled me with instant hope. Christ would take all that I was as a sinful woman and let it be crucified with Him, as if I were dead. He would also take all that He is and live it out through me as though it were indeed my very own life. An EXCHANGED life! How utterly amazing that truth was to me. I didn’t have to try to live like or BE a Christian! He Himself would do it through me. Immediately, I allowed all the remaining stones that I’d piled over my heart to fall and trusted the Lord Jesus Christ to enter as my Savior, my very life.

Our children were 1 and 3 years old at the time. As a new believer, I had no foundation on which to be a Christian mother. My foul language, bouts with anger, and severe brooding depression frequently overwhelmed me with a sense of failure and inadequacy that made me wonder what was missing. When I asked other Christian women to help me with my failings, they avoided me, wondering how I could possibly even be genuinely saved. After all, we’re supposed to be a new creature in Christ. Old things were supposed to have fallen away. I was failing on every side, inadequate and desperate. I did the only thing I knew how to do and cried out to God for someone to help me! Someone to just show me how to be a Christian wife, mother, and woman.

His answer came swift, profound, and lasting. My daily reading for that day was in Psalms. His answer to my desperate cry for help came in chapter 32. His declaration to me was, “I will instruct you and teach you about how you should live. I will guide you with Mine eye. But do not be like a horse or mule without understanding whose mouth must be controlled with a bit and bridle” (vv. 8-9). Instantly, I realized that God was not only my heavenly Father, but He would gently mother me as well. Again, I ran toward Him as my trusted Father who also possessed all my needed motherly qualities as well. From that very moment, He began filling my life with women and opportunities I could never have sought or found within my own scope of resources.

“As a mother stills her child, Thou canst hush the ocean, wild Boisterous waves obey Thy will, when Thou sayest to them ‘Be still’"

Within a week, I heard an announcement over the radio for a 9 week Bible study called “Philosophy of Christian Womanhood.” It was held at a church very close to our home. The Lord opened my heart during those weeks to learn the beauties of biblical submission, role differences within a marriage relationship, and personal responsibility for feeding on and obedience to the Word of God. He worked in my heart a deep desire and love for the things that mattered to His heart. He sanctified my heart, mind, and character. By His Word, He was pulling down strongholds threatening to destroy my testimony and my family. Through the years, He placed me in the company of women who did mentor me, not with deliberateness or even knowingly, but as I quietly observed them living out their faith before me. Dozens of women will never know the part they played in God’s plan to “mother” me in His own way, on His own timeline. He did it compassionately and mercifully without embarrassing me by always identifying or labeling the lessons being learned.

Nearly forty years later, I rejoice as I recall each stepping stone along the amazing path of healing and spiritual growth God has led me. My father’s sixth wife paved the way for him to reconcile and reconnect with our family, giving us times of healing and healthy interaction. Though I don’t know if he responded favorably, I was able to share the gospel with him several times before he passed away. My first stepmother and I enjoyed a 20 year season of friendship and reconciliation after genuine, mutual forgiveness. My husband and I shared the gospel with her in our home and saw her come to true faith in Christ. She was delivered from alcoholism and bitterness. After she passed into the presence of her Savior, I stood next to her open casket and wept for all she had gone through in life. I had peace knowing that I had told her how much I appreciated her efforts to mother me in the most difficult of circumstances. I genuinely loved her those final years and together we learned that love can be extremely painful to give and receive.

I’ve been given the joy of reconciliation, forgiveness and restoring the dignity of motherhood to my birth mother. She passed away this past Christmas after 3 months of languishing from a massive stroke. We brought our grandchildren to meet her in the nursing home. As they sang hymns to her, tears of appreciation dampened her pillow. When she passed into eternity, I stood next to her empty bed with tears of unspeakable joy and gratitude. My heart was overwhelmed with the realization of how God has used my own failures in life as a woman and mother. He used them to open my heart to receive His forgiveness so that I could readily forgive others. There is no peace like the peace of knowing there was nothing left unsaid between us. The “mother place” in my heart is now whole. It is cleansed, healed, and full. Today, I enjoy watching my own daughter find her way through motherhood as she and her husband walk their own path of life and faith before their children. We talk freely of the mistakes I made as her mother and how God healed them. She witnessed firsthand the power of the Cross and the Word sanctifying a desperately broken woman being made whole.

God has given us 10 grandchildren. Divorce did repeat itself in our son’s marriage, and it deeply saddens me that 4 of our grandchildren are having to walk through some of the same dark valleys I once knew. He is remarried and gained 2 more children by that marriage. God continues to assure me that I can fully trust Him. He is trustworthy not just as my own heavenly Father, but as the One whose tender heart is more watchful and caring than that of any mother.

“Be glad then, ye children of Zion, and rejoice in the LORD your God: for He has given you the former rain moderately, and He will cause to come down for you the rain, the former rain, and the latter rain....and I will restore to you the years that the locust have eaten...whosoever calls on the Name of the LORD shall be delivered...” -Select portions from Joel 2 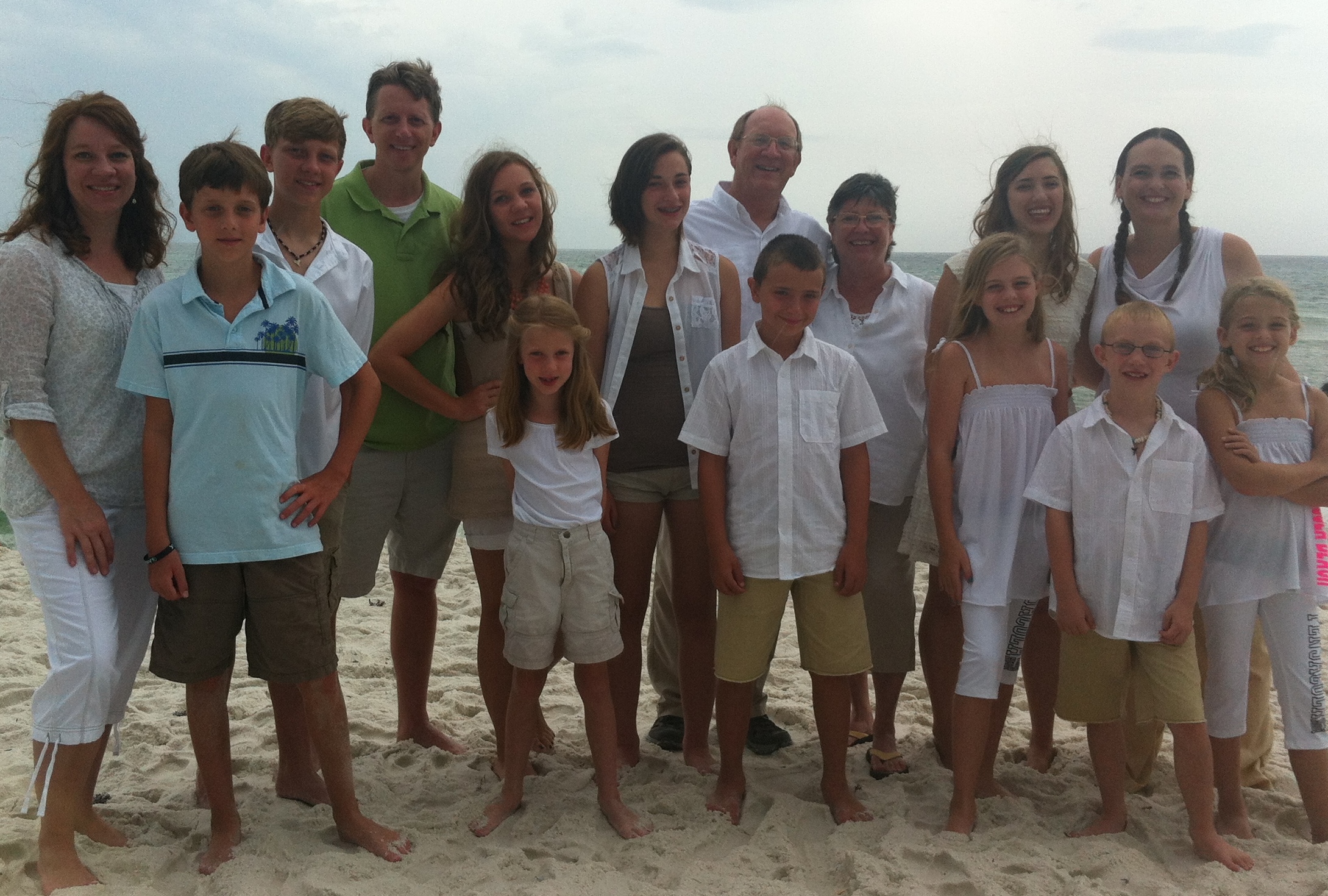