This week as we look towards Mother’s Day, we will feature various blog posts by mothers and about motherhood written by women in our church. Today’s post was written by Jan Rowland. To read Part 2, click here.

Mother’s Day has always been a tactical challenge to navigate. By my 40th birthday, I finally learned how to bless each of my 5 stepmothers and my birth mother on this special day set aside for honoring mothers. There simply aren’t any Hallmark Cards adequate for my circumstances, so I always make my own.

We lived in California during my childhood. I spent weekdays in a foster home and weekends with my mother. But at age 4, with no warning or explanation, I was taken from her by 2 complete strangers. They would be my parents for the next 13 years. I was totally unaware that one of those strangers was actually my biological father, accompanied by his new bride. (As an Air Force pilot, he travelled constantly. I never saw him, so I did not recognize him.) 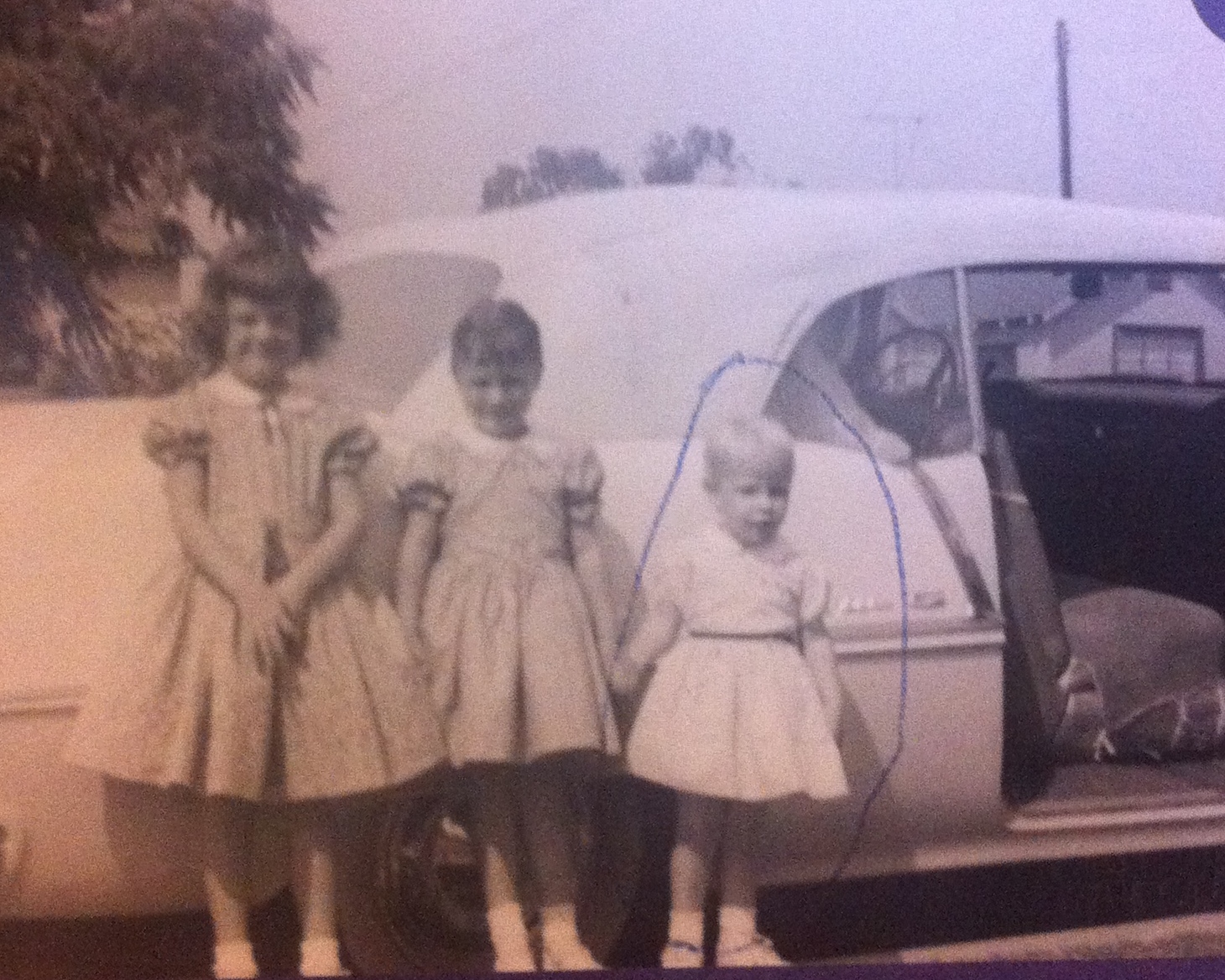 My younger sister (2 years old) could not go with us. My last sight of her was in the arms of my weeping mother, shunned amidst doubts as to who her father really was. My older sister, 6 years old, sat tearfully and silently next to me in the back seat of the car while I screamed, flailed, and pitched a royal FIT the entire drive. In utter defiance of these “strangers” keeping me and not returning me to my mother that first weekend, I “showed them” by repeatedly peeing on their bathroom floor rather than in the toilet. That wasn’t the least nor the last of my childish, destructive attempts to avenge my unwelcomed plight. Four year olds cannot understand divorce or custody situations. In my mind, they had kidnapped me! I was determined to make them sorry for what they had done! “If I punish them enough, they will gladly give me back to my Mommy very soon,” I reasoned. Weeks of temper tantrums and emotional meltdowns proved futile to my scheme. Increased slaps and belt-whippings were employed to tame me.

There were no words in my limited vocabulary that could adequately express my deep sense of loss, my angry feelings of being violated, nor the depth of my grief. I could only express myself through behavior, which made it nearly impossible for my new mother to nurture me. I would not trust her and for several days didn’t even speak to her. Like stones piled one by one in a heap over the entrance of a tomb, I began to seal off that sacred “mother-place” in my heart. Something inside died a slow and agonizing death.

With time, I grew to realize she was the only one meeting my physical needs. I even began telling her I loved her since that word seemed to make things easier in our household. I also discovered the word “love” facilitated me getting my way on a few things. “I love you Mommy” sure came in handy when I used it to manipulate situations I feared. “Love” became the most misused, misunderstood, and dishonest word in my vocabulary. That was ALL it was to me.....a word, a key to open a door with some sort of prize behind it.

Whatever bonding that may have occurred with my stepmother by age 12 was shattered when she gave birth to the first of her two biological daughters. Though I genuinely adored my half sisters, they slowly became a source of resentment as I observed how much natural, tender love she had for them. I couldn’t discern exactly what had changed, but it was glaringly obvious to me that she loved her natural born children in a way that I had never experienced. The way she held and touched them, her adoring look, and her cooing at them so affectionately was riveting, yet somehow painful to watch. I was observing real mothering, yet my resentment and jealousy gave an outlet to feelings I had long since buried. That old destructive behavior seemed to reinvent itself in a whole new direction.

By age 13, I had discovered the emotional escape of marijuana. I vividly remember exclaiming to my friend during my first high, "WOW! this is the FIRST time I’ve ever felt happy in my entire life!” The sad thing is, I actually believed those chemically induced feelings were happiness. When I was high, I felt no inner pain or turmoil. Marijuana became my welcomed escape for the next few years. My stepmother was an alcoholic. If she could have her emotional escape, I justified that I could equally have my own. However, it only served to enlarge the bitter gap between us.

My school grades plummeted all in one semester. A string of counselor and psychologist visits began to interrupt my school days. I knew what they were looking for but was determined not to reveal my new “secret to happiness.” Quite honestly, I relished the attention I was getting. It felt like caring to me. For the first time in my life, I felt valued by people who actually wanted to know what was going on inside of me. There was always quite a bit of violence between my parents at home, so I deceptively pinned my declining behavior on them to avoid being found out.

For years, my older sister and I had been dropped off at a local church on Sundays. I never understood why my stepmother wouldn’t attend with us. She grew up in a very small, deep South Baptist community, so she dutifully insisted we attend church. At the time, I didn’t realize how much her drinking problem kept her from coming inside with us except on Easter Sundays. Church was just another place I did not fit in. Sometimes I just slipped out the back door and went to a corner store where I stole candy to enjoy while the pastor was preaching. When my school counselor tenderly explained the love of God for me through the work of the Lord Jesus Christ during one of our sessions, it made a profound impression on me. I very well knew how wretched my inner heart was. But she made it sound that I, too, could be accepted and loved by God. A stone or two fell from the door of my heart, and a seed was planted deep inside - a seed, however, that lay dormant in my heart for the next decade.

God’s sovereign grace was orchestrating my life at every twist and turn. Shortly after my 15th birthday, my father took a new job in Colorado. That move seemed to draw our family closer. Having no access to drugs gave me a new start. Things were going smoothly for once in our family, and for a while, my father even became more active in our lives. Though my stepmother’s drinking slowly increased, it made her more mellow and easy going. My new school provided great friends with good influence. They invited me to a weekly Christian Campus Life meeting, and my parents thought it would be a great outlet for me. Within a month, one of the college guys on staff at Campus Life took a romantic interest in me. We had dated only a few weeks before he re-introduced me to marijuana, and we began smoking it frequently together.

The effects of that foolish decision were quickly felt at home when my stepmother found marijuana in my bedroom. She called the police, and I was arrested out of my classroom at school. Two weeks later, I was ordered to appear in juvenile court before a probation judge. As my father and I were walking out the door for that appointment, my stepmother gritted her teeth at him and growled, “have her put in a foster home this time!” All the years between that exact moment and the one when I first met her suddenly vanished. Both moments came slamming together as though nothing had ever existed between them. A ticking time bomb exploded inside of me, dislodging every fragment of hurt, fear, and resentment I had managed to hide deep within the cracks and crevices of my heart.

God hears things that are not spoken. He understands the violent raging of a heart having no way to express its agony. I know He lovingly came to my rescue that day as I stood before a Christian judge telling my father that I did not fit the profile of drug addicted teens and urged him to seek counseling for me. He did not, but my probation was over in six weeks. I cautiously stayed hidden in my bedroom and to myself while things settled somewhat at home.

My boyfriend and I began dating again. One evening, he asked if we could double date with his college roommate and his date. (They had only roomed together for a few weeks at a local Christian college, so they didn’t really know each other well.) When the evening was over, I went home and told my older sister that I had met the guy I was going to marry. His roommate left me with the most powerful, unexplainable impression of him as someone uniquely warm, caring, and thoughtful. I experienced the strangest yet certain impression that I would marry him someday. Fast forward the story of my journey two years to March 6, 1970, when I DID in fact marry that young man a few weeks shy of my 18th birthday! It was an indescribable relief to be out of my parents house and in a place of our own until unresolved and hidden issues of my heart created problems we didn’t even have labels for.

Two months later, my parents divorced again. My father remarried a third time to a delightful German lady named Erika. She invested herself in me enthusiastically by teaching me to knit, cook, and do other domestic things. I even began calling her “Mom.” She was considerably younger than my father and had no children of her own, but her nurturing influence in my life softened that “mother-place” deep within me. I genuinely grew to love Erika. Near our first wedding anniversary, I discovered that my husband and I were going to have a baby. I welcomed the idea of becoming a mother, and Erika lovingly helped me prepare a suitable nursery in our tiny apartment. I cherished the time and gifts she lavished on me as we worked together over the next 7 months.

During my pregnancy, I felt a need to reconnect with my birth mother. She had only visited my sister and me twice since we’d been taken away from her. Something about becoming a mother myself awakened a desire of having a relationship with her again. I never mentioned this to my father or Erika. It was very awkward and painful at first, but then my birth mother began sharing her side of our painful past. Her recollections were vastly different from things I had been told about her as a child. She had been raised by her older sister after being abused by a stepfather then abandoned by her mother at age 13. Learning her difficult circumstances and how unprepared she had been to become a mother softened my heart to her. Walking cautiously together through those early steps of reconciliation proved to be a timely way God was softening my own heart and preparing me for motherhood.