We like to think we can direct our own path and that we will produce the best life. Interesting enough, the Bible never instructs us to follow our own path; instead, we are instructed to allow the Spirit to lead us.

Thirty year-old Grace Wood, a member of Brook Hills since 2010, grew up in Detroit as the oldest of five to strong believing parents who shared the gospel in their everyday lives. At the age of six, Grace understood that there was brokenness between herself and God and that accepting Jesus Christ as her personal Lord and Savior would be the only way to mend this relationship. As she grew up, the paths of righteousness and sin became hard to differentiate, leading to a rebellion in her heart. She expressed that this led her to turn to worldly fulfillment during college, filling her time with alcohol and unhealthy relationships. Grace said that she “fell into the lie that we can compartmentalize our spiritual life from our moral decisions.” 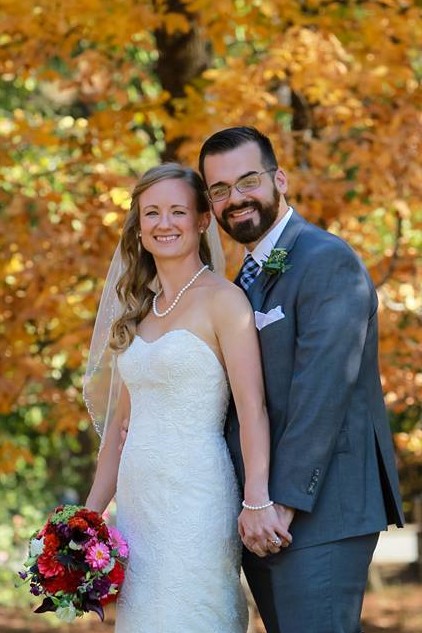 Soon after college, Grace found herself working at an accounting firm here in Birmingham, purchasing a house, and very quickly becoming an adult. A friend from work, Allison Samford, asked her to attend church out on 119 with her. Not knowing anything about where she was going, Grace found herself at Brook Hills for the first time and heard David Platt deliver a message that convicted her at her core and drew her back into the gospel. “I discovered that as I continued to get to know people who really loved and followed Jesus, living in sin became impossible,” Grace commented.

Grace soon joined the church, found a small group, and began serving on the Singles 20s/30s Ministry Leadership Team where she met a sweet man named Andy Wood. At first they were just friends, finding themselves having long conversations after meetings, but they eventually began dating and got married in October of 2016. Grace now works as an accountant at The Lovelady Center, a ministry that serves women who have been in drug rehab or prison.

Grace speaks of one theme over most others in her life: “The gift of community humbles us and brings us back to truth.” Discipleship, accountability, small communal living - when these things are combined with people who love and take deep joy in the Word, those who aren't living in accordance with God’s plan are quickly shaped by the love of those who are.

Grace spoke about the beauty of living in deep community before marriage, especially with her roommate who also co-led a singles small group with her for five years. In describing this friend, Grace remarks, “She has knocked down so many trees in my selfishness forest, I tell my husband how well he has it.” This friendship made her realize true relationships should last through many seasons so that true depth and gospel love may abound. Speaking for her generation, Grace expressed the ease of only having certain friends for a season “and then bailing because we don't want deal with the crap that comes from deep relationship, but we just call this seasons and think its okay to move on without them.” What a convicting idea, especially for younger generations- community built in Christ is supposed to weather the storm. It is supposed to touch us at the core and pull us closer to Christ.

Life right now to Grace is about living in deep relational community, growing in her new marriage, and soaking up her stage of life. When asked what discipleship meant to her, Grace answered with this beautiful quote: “The thing about discipleship is that it’s dynamic not static.” Scott and Jaime James, who served as the Elder and Elder’s wife over her small group, taught her this beautiful picture of true discipleship. While catching up sometimes consisted of planned meetings at a local coffee shop, it also included many a nights around a table for dinner or phone calls when a tragedy hit. They allowed her to see what a gospel-centered marriage looked like. They taught her about daily grace.

Grace is not the oldest or the youngest member of our congregation. She isn’t the boldest or quietest, but she is first out of this series because her life truly resembles what deep community in the body looks like. When you speak with Grace you understand that Brook Hills has changed the way she worships Jesus and that is the purpose of the body. So if you see Grace, stop and say hey and rest in her calm and relaxed spirit. As a woman of God, she will speak to you with simple truth and help you realize why you love this body even more.