Around Brook Hills, we often talk about “doing life together.” You might have even seen our hashtag on social media: #bhlifetogether. This is what we say to describe the everyday part of living out our lives together as a faith family—building and sustaining relationships that show up for both the good and the gritty, all while pointing one another to Jesus Christ.

These relationships are what makes ministry work so rewarding for Eric Rosenberry, the new Student Minister at Brook Hills. It’s his favorite part of student ministry, as well as what God used to draw him into a deeper faith and confirm his calling to ministry.

He trusted in Christ when he was eight years old. “I knew who Jesus was and knew what he had done for my life, and I was excited to start that relationship with Him. Of course, as an eight-year-old making that decision, not much changed in my life after that,” he says.

But when Eric was eleven, he tragically lost his best friend in a car accident on Christmas Eve morning. “That was a real turning point for me. It was hard because there was a lot of anger and frustration, like ‘God, why would you do this?’ And as an eleven-year-old, you’re not thinking that you’re going to lose friends that quickly. I really struggled with why God would do that.”

In this season, God provided for Eric through his relationships at church with his small group leaders, middle school minister, and other pastors. He remembers, “They were showing up at my house, coming alongside me, and praying for me. That’s really where I began to see the church as a community of believers. That strengthened my relationship with God because, as tragic as it was for me to lose a friend, I saw that He was making sure to put the right people in my life to speak into it, and that He truly did love me and care for me even in the hard times.”

Then, as a junior in high school, God used Eric’s community to guide him once more as he considered his career plans for after high school. “I thought I had my life figured out. I wanted to go into athletic training because sports had played a huge role in my life. But God had something better and I felt a tug toward student ministry.”

Through a lot of prayer, hard conversations, and surrounding himself with people he trusted and knew would be honest with him, Eric pursued his ministry calling. He went on to graduate from Carson-Newman University, later receiving his master’s degree from Union University, all while gaining experience and learning lessons serving in student ministry.

Now having been in ministry for thirteen years, he’s excited to begin “doing life together” with our students, their families, and our student ministry leaders. He says, “I’m a relationship-type person, and so I love doing ministry with people. That’s really when ministry happens, as we form relationships with students and live life with them."

One of his favorite parts of student ministry is getting to step into students’ lives at a time where they are beginning to own their faith. “Students have to navigate so many things in life, especially in today’s world. They're entering schools and are having to be able to defend their faith, know what they believe, and why they believe it. They’re also learning to navigate situations with friends going through depression, thoughts of suicide, drug addictions, alcohol problems, or might be facing these themselves."

"They’re really trying to figure out who they are and where their identity is. This is a point in their lives where we get to have conversations with them and help guide them in their faith journey to understand who Jesus is, what He means for our daily lives, and how to live that out.”

He also loves student ministry because, “I get to be a kid too, which is great. I love joking around with them, middle school students especially, and getting to step into that awkwardness with them. Being able to live life with them and be a part of their lives, it’s just fun. There’s never a dull day in student ministry. There’s always something new and fun around the corner.” 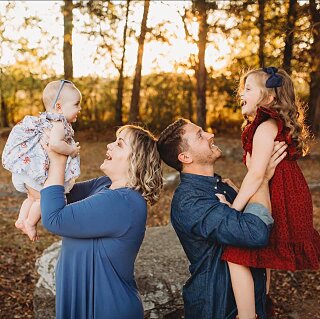 Eric and his wife, Dianne, have been married for almost thirteen years and are moving to Birmingham from Murfreesboro, TN. They have two daughters Hadley (7) and Ellie (2). Please join us in giving them a warm welcome as you see them around campus!