On Sunday, June 24, we affirmed Chip Bugnar to serve as Elder and Global Pastor for The Church  at Brook Hills. Please join us in praying for him and his family as they transition into this new role and season of life.

Chip grew up with parents who were deeply involved in church and church leadership. He had some understanding about the truths of Jesus and was even baptized at the age of 11. However, he had never truly repented and put his faith in Christ. “When some of my idols began crumbling around me during my freshmen year of college,” Chip said, “I visited a Campus Crusade meeting. Shortly thereafter, two guys came to my dorm and shared the gospel with me. I began reading the Bible and attending Crusade’s weekly meeting as well as a Bible study. Through that time, God opened my heart and I began to be transformed by the news that Jesus came to live the life we could not live and die the death we deserved. His resurrection secured a new life for me where I could step out of the shadows into His light.” Then, as a public proclamation of his present faith and real repentance, Chip was baptized in August of 1999. 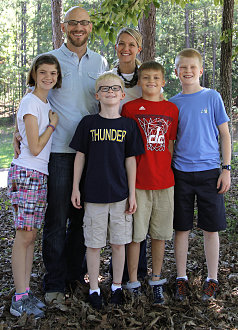 Chip and his wife, Rebecca, met when they were randomly paired together as prayer partners while on a short-term trip to East Asia. They’ve been married for 18 years and have four children: Emma (13), Owen (12), Ben (10), and Simeon (9).

After graduating from NC State with a Bachelors in Public and Interpersonal Communications, Chip studied at Southeastern Baptist Theological Seminary, where he earned a Masters of Divinity in Advanced Biblical Studies. During this time, he began an internship at Providence Baptist Church in Raleigh, NC. His service there eventually developed into a pastoral position in college ministry. In that role, He was instrumental in mobilizing many students to commit their lives for the cause of the gospel among the nations.

In 2010, while considering being sent out to plant a church in a different part of the Raleigh area, God redirected Chip and Bec’s vision to the unreached of Central Asia as a part of a larger team being sent out by Providence at the same time. Since 2011, they have been laboring among the unreached. Chip began leading the team in their city since 2012. “We still long to see the unreached reached through healthy gospel laborers who proclaim the gospel clearly among them with the aim of planting disciple-making churches,” Chip said. “I believe it is the local church's privilege and responsibility to train, affirm, send, and sustain laborers. Prayerfully, I see this culture being created as we grasp the glory of the gospel and its global implications through preaching and discipleship. I particularly desire to see future generations of laborers established in the gospel, equipped with a biblical vision of the local church, and affirmed in ministry before being sent out.”

Read some of Chip’s thoughts on shepherding God’s church to the nations on our blog.

Chip exemplifies the characteristics required of elders in 1 Timothy 3 and Titus 1. He loves the Lord and loves his family well, and this overflows clearly into his leadership in the church.

Please be praying for Chip and his family during these days. Here are some specific ways you might pray: