Growing up from 1-year-old to 6-years-old with my whole family together, I’ve kind of constantly been surrounded by Christ. I’m not saying that I’m not constantly surrounded by Christ now, but when it was just pouring on in my early ages from my parents I was just, like, “Man, these guys love Christ. I want to be like them.” I was on the verge of – I’d had the talk several times – of becoming a Christian and then that one March day came when Dad died, and he went up and he experienced Heaven himself.

I knew he went to Heaven... I’d like to share the same experience when I die. I don’t want to be separated with him. I love him, dearly. I’d give away a thousand days of having whatever I want just to have one day with him, and I just thought to myself, “You know what? I gotta see him again.” And I kind of devoted my life for a good week or two to just doing everything I could to see him again. Then I realized what I was looking for was right in front of me the whole time.

But on a serious note, I just sat down with my mom that day. This was, like, August, because, like I said, I was on the verge of becoming a Christian right before he died. And, like, the first couple of days, man, I doubted. Every person that’s experienced some kind of loss has probably had thoughts, like, “If God exists,” you know, “He wouldn’t have done this. He loves me, right? That’s what you’re telling me? Well, He wouldn’t have done that if He loved me.” And I had a week of that, maybe. Then, I just kind of looked at how my relationship was with Christ compared to others. My Mom’s family grew up without Christ, and at my dad’s funeral I saw a family member standing in the back who I knew wasn’t a Christian and I thought, “I could have the lack of faith as much as him, but I actually had the privilege of growing up with Christ. I gotta use this.” Just all the teaching I’d had before, plus the teaching after my dad died, I just kind of added it all together and I found Christ.

And, of course, at that point I knew – ‘cause my mom’s never gonna let me forget – you know, being baptized doesn’t mean you’re going to Heaven. You gotta actually know Christ. You have to believe in Christ. You have to be willing to go to the end of the world for Christ. And I guess that... not only was my dad’s death a huge tragedy – and what the devil would think, “Oh, Yeah! This is my way to get this kid,” – but it was also strengthening to my faith, in a way. So that’s kind of how I felt, and I’d say by the next year, I was basically a full Christian. We were baptized on Easter in 2011, my twin sister, Grace Anne, and I. And here’s a little quick confession here... I sneezed in David Platt’s hand when I went under... and they got it on video.

My mom, she’s a very humble woman. She would say it was by the work of so many other people than herself that I found Christ. But, really, she was the motor on the boat that took me to God, along with other people.

She’s doing a wonderful job with the family. She’s been keeping us in the Word with daily devotions and she’s constantly sharing Christ with people around her and with us every day.

Recently, we just finished studying Job and talked a lot about how faithful he was. It was such a good book and so inspiring
to me. In the sense of Dad, I learned a lot about having to walk through faith as if I’m not the only one going through all these troubles. Job lost everything he had. I mean, in comparison, I lost my dad, but I haven’t lost everything.

Where I’m at in life now, I think being a part of the Student Ministry at Brook Hills has been the coolest place for me. I love the Student Ministry. Not only is it such a great environment, with great people – and I’m telling you, the snack bar isn’t that bad either – it is also a great place to learn about Christ, to be in Christ, and to learn how to be a good temple where Christ rests. All my teachers have been great. They not only make it a good heartfelt sharing of the gospel every time, they make it interesting and something you want to listen to, to where you’re not just about to fall asleep in the middles of the sermon... They add the pizazz!

And I just find it to be such a friendly environment. To the guy that’s driving by The Church at Brook Hills thinking, “Man, that’s a big church. If I go there I probably wouldn’t even get noticed.” You are wrong, my friend. For anyone that is going to come and join the church, I would probably embrace you and I think everyone else would do the same.

Every once in a while there’ll be a new kid and I’ll be asked, “Hey, Trey! How ‘bout you show that kid around?” And sometimes I’ll have this spike of nervousness, but then I’m like, “I’ve done this many times. Alright! I know what to do.” And I grab the kid, introduce myself, ask him about himself, and show him around and introduce him to my friends. I try to make them feel as welcome as possible. People aren’t like, “I’ll stay with my group. You stay with your group. And that’s just how it is.” Everyone is one family. One faith family. 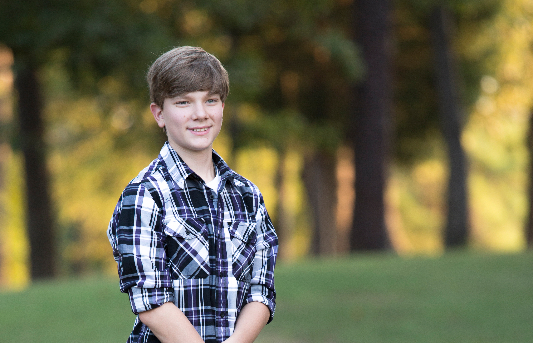 Trey Greene is 13 years old. He was born in Nashville and moved to Birmingham when he was two. He has been discipled in Brook Hills Preschool, Children, and now Student Ministry. He is a soon-to-be black belt in Tae Kwon Do and is active in Trail Life USA where he loves the biking, hiking, camping, and paddling trips. He hopes to be an architect one day.